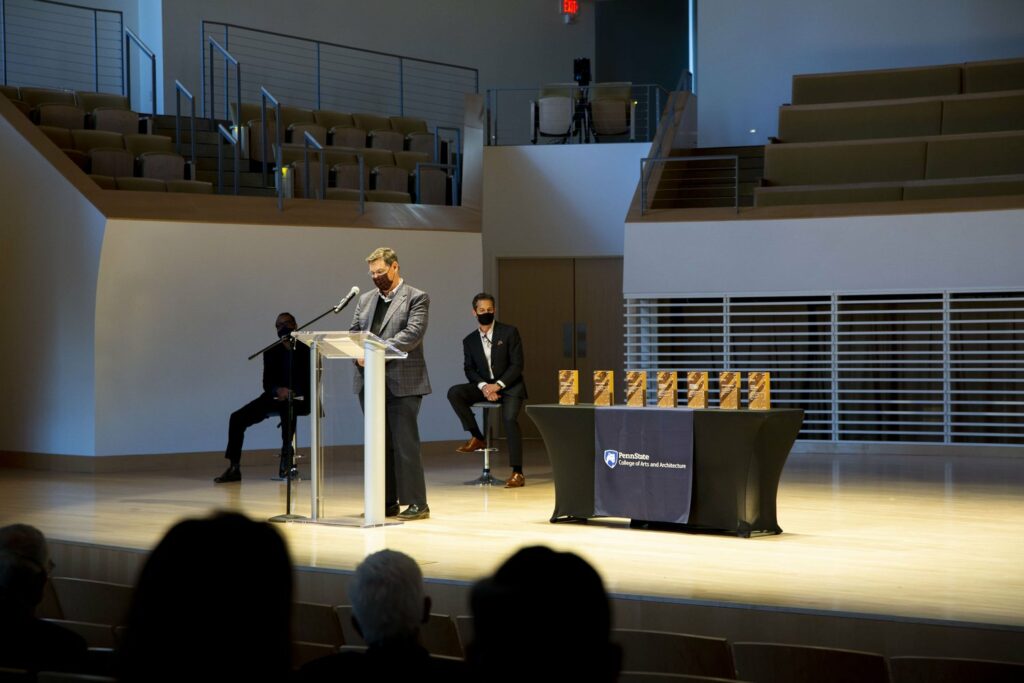 Peter Margittai, AIA, a ’93 graduate of Penn State, President of Margittai Architects and Immediate Past-President of the College of Arts and Architecture Alumni Society Board, introduced his longtime friend, Dittenhafer, for his award, confessing he had a big smile behind his facemask.

Dean of the College of Arts and Architecture B. Stephen Carpenter II opened the awards event by stating “The actions of our alumni out in the world, perusing their passions and their professional lives, are a reflection of their Penn State connection,”  “You give so generously of your time … for which we are exceedingly grateful.”

“The standards of excellence at Penn State are very high, and to be recognized among so many accomplished people whom I consider to be ‘greats’ was an honor,” Dittenhafer says. “There is no substitute for what I gained at Penn State.”

While Dittenhafer is co-founder and President of the firm Murphy & Dittenhafer Architects, with offices in York, Pennsylvania, and Baltimore, Maryland, he has been engaged with Penn State since he graduated more than 40 years ago.

He currently serves as the President of the Penn State College of Arts and Architecture Alumni Society Board and also represents the Alumni Society on the College of Arts and Architecture’s Philanthropic Council. He’s also actively engaged with Penn State York, where his firm recently designed and received several Central Pennsylvania AIA awards for the new Graham Center for Innovation and Collaboration.

Through his continued involvement with Penn State, Dittenhafer aims to give current students access to all of the resources he had and more. He’s mentored several students, hired others at his firm, and recently encouraged others on the A&A Alumni Board to contribute for the first time on Giving Tuesday (November 30, 2021) to the College of Arts and Architecture scholarship fund – which successfully raised approximately $7,500.

“I hope the tide keeps rising,” Dittenhafer says. “There’s a level of excitement that Arts & Architecture alumni are engaging with current students, and you see the benefits of that.”

Through it all, Dittenhafer hopes to show that exciting, inspiring Architectural design work can be done in places like York, Pennsylvania, and Baltimore, Maryland.

“There are other big cities with exciting things going on, but they aren’t the only places where design opportunity exists,” he says. “You can make a big impact in a meaningful way in communities that need it. I hope that’s the inspiration I can impart.”