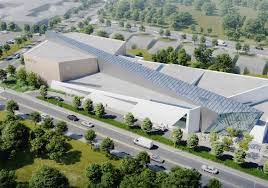 The Tree of Life synagogue — the location of the deadliest antisemitic attack in U.S. history — may in future years become a national institution encompassing a memorial, a museum and a center for education meant to combat the very kind of hateful intolerance that led to the mass shooting at the site.

Plans for the Squirrel Hill synagogue, which has been vacant since the Oct. 27, 2018, attack that claimed the lives of 11 people from three congregations in the building, were updated Tuesday by Tree of Life officials and the architecture firms working on the project.

The new structure is set to include a “dramatic skylight” that will run the entire length of the building, ushering in light and creating the main axis that connects a series of programmatic spaces for the various needs of the institution, officials said. Along the so-called “Path of Light” will be a museum, the “Space of Memory,” intended as an area of reflection and remembrance, and a modernized sanctuary for worship and communal events.

“While, yes, we will be building an incredibly beautiful building, equally important is what emanates out of Tree of Life,” Rabbi Jeffrey Myers said at a press conference Tuesday in front of the synagogue. “A place where there’s hope. A place that can light the way for a brighter future, which is indeed possible. A place that the world’s going to go ‘Wow, look what they’re doing there.’”

‘It is a Hanukkah present’: Wolf directs $6.6 million to Tree of Life reimagining project

But while the architects are working to create an impressive structure, synagogue officials are also working to make the site a center for education that aims to fight against antisemitism and other forms of hate. A new, nonprofit “national institution encompassing a museum, memorial and center for education” will be created under the name Tree of Life.

The nonprofit organization will be led by a CEO and governed by a board of directors separate from the congregation. The Holocaust Center of Pittsburgh will merge into the new organization to create “a single institution dedicated to ending antisemitism,” a news release said.

The Holocaust Center will continue to hold its usual programming — such as remembrance day commemorations — but will also expand in an effort to make the lessons of the genocide more relevant to today, according to director Lauren Bairnsfather.

“Through our strategic planning process that we’ve gone through for the last year and a half, we determined that this is exactly what we want to be doing,” Ms. Bairnsfather said. “Because we were already talking to Tree of Life, quite organically we arrived at the vision of a new organization, a new Tree of Life, that includes what we know about Holocaust education, but what we also know about educating to stop identity-based hate.”

Rabbi Myers said data recently released by the Anti-Defamation League showed that in 2021 there were more than 2,700 antisemitic acts — a 34% increase from the prior year — in the United States. That fact, he noted, was why it would be important for the site to include educational amenities, such as the Holocaust Center.

Although the new site will be a center that aims to end antisemitism, it will also be “rooted in the belief that eliminating antisemitism will reduce other forms of identity-based hate,” the news release said.

“Antisemites are not merely antisemites,” Rabbi Myers said. “They are also anti-Black, anti-gay, anti-Asian/Pacific Islanders. Anything that they’re not comfortable with, they spew forth their vile language and actions.”

Tree of Life officials say fundraising for the project continues, but they declined to provide any details on the financial aspects of the plan Tuesday.

“As far as being able to support the project, we’re where we want it to be at this stage, regardless of the fact that we’ve had a pandemic and we haven’t been able to meet people face to face and ask for support,” said Ellen Stewart, co-chair of the “REMEMBER. REBUILD. RENEW.” campaign that is raising funds for the work.

Late last year, the state awarded Tree of Life a $6.6 million grant for the rebuilding of the synagogue.

No timeframe for the project has been announced. More information about programming and the building is set to come in November.

The new center will be housed in an approximately 45,000-square-foot building at the corner of Shady and Wilkins avenues in the same footprint where the synagogue now stands. It is being designed by Studio Libeskind, in collaboration with Rothschild Doyno Collaborative of Pittsburgh.

The design incorporates historic building elements, including stained-glass windows depicting stories of American and Jewish history. The limestone façade of the building will also be maintained.

The “Path of Light” will stretch from that portion of the building at the corner to the entire length of the structure down Wilkins Avenue.

“Our design concept was really to bring light into the darkness,” said Carla Swickerath, a partner at Studio Libeskind. “That became our driving force through every iteration and every design decision that we’ve made — to recognize what has happened here, but to also reassert hope and light into this site.”

“The Tree of Life/Or L’Simcha board members are to be commended for their perseverance and foresight,” Stephen Cohen, New Light’s co-president, said in a statement. “They’ve put together a comprehensive package that commemorates and honors the victims; remembers that this was the worst antisemitic attack on U.S. soil, and creates programs to educate and help eradicate antisemitism.”

“As a member and president-elect of Congregation Dor Hadash, I enthusiastically support the plans for a reimagined center, designed by the renowned Daniel Libeskind Studio, that will include a museum and educational center to combat antisemitism, as well as a memorial to honor the lives of the 11 individuals lost on 10/27/18, and the sanctuary for the Tree of Life congregation,” Jo Recht, president-elect of Dor Hadash, said in a statement. “For centuries, deep-rooted antisemitism has resulted in the targeting and scapegoating of Jews. As Reconstructionist Jews, we recognize that the stakes have never been higher, but neither have the possibilities for social change.”