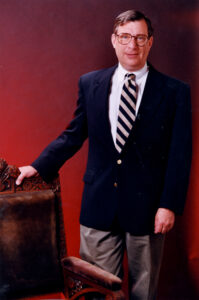 yman Myers, FAIA, a nationally recognized architect with a strong expertise in the fields of historic preservation, museum master planning, and design passed away on October 17, 2022.

Mr. Myers was a graduate of the University of Pennsylvania, receiving both his bachelor’s degree and Master of Architecture degree from the school. Mr. Myers worked at VITETTA from 1973 until 2004 leading their efforts in the areas of preservation planning, restoration architecture, museum planning, and design. As Director of the Historic Preservation Program, Mr. Myers had overall responsibility for the design development and documentation of projects involving the restoration, rehabilitation, and reuse of existing buildings, as well as planning and design of museum facilities. Mr. Myers lectured nationally on the subject of preservation, was active locally and nationally on preservation committees and boards and served on several historical commissions. He taught and lectured at the University of Pennsylvania in the Graduate Program in Historic Preservation lecturing yearly for Theories of HSPV and in Studio.

A renowned expert on Victorian architect Frank Furness, who designed hundreds of Philadelphia buildings, Myers relished rescuing the city’s historic gems from neglect and returning them to their ornate glory. Mr. Myers oversaw the 1976 restoration of the Pennsylvania Academy of Fine Arts, designed a century earlier by Furness. Under Myers’ direction, the ornate brass lights in the Broad Street building gleamed again and its star-studded cobalt ceiling was restored to its Victorian splendor. He advocated for the creative reuse of historical buildings while retaining their integrity and preserving their appearances.

During his 50+ years of practice, Mr. Myers fostered the highest quality design within the public sector. He has been involved in numerous restoration and rehabilitation projects throughout the United States, including a World Heritage Site, more than 60 National Historic Landmarks, over 60 listings on the National Register of Historic Places, and over 70 state and local landmarks. In all, Mr. Myers completed over 200 historic projects totaling over $500 million worth of investment within the public sector.

Mr. Myers vast knowledge of historic buildings and styles, and engaging personality, made him a greatly sought-after preservation expert. He achieved a reputation with clients and colleagues for great creativity, design excellence, hands-on involvement, strong leadership, and the highest level of client satisfaction. Mr. Myers enjoyed many long-term professional relationships with demanding clients on numerous projects each spanning more than twenty years; examples include the Academy of Music in Philadelphia, the National Gallery of Art, and Pennsylvania’s Capitol Building in Harrisburg. These clients returned to Mr. Myers year after year because of his great breath of planning, preservation and architectural skills; his great knowledge of historic as well as contemporary materials and methods of construction; his personable team-building and leadership skills; and his dedication to the projects of the highest quality. His work on these projects won dozens of national, state, and local awards of excellence.

A longtime collector of books on Victorian decorative arts and 19th century architecture, he donated his vast holdings to museums and cultural institutions.” His individual contributions to the profession were recognized by numerous awards including the F. Otto Hass Award from Preservation Pennsylvania in 1992, the James Biddle Award for Lifetime Achievement from the Preservation Alliance for Greater Philadelphia’s in 2009, the John Harbeson Award from the Philadelphia Chapter of the AIA in 2013 and his induction into the AIA College of Fellows in 2005.
He was a leader in the field of historic preservation, a font of architectural knowledge and a wonderful person who will be greatly missed by all who were lucky enough to have known him. His family has suggested that contributions in his memory be made to the Victorian Society in America (www.victoriansociety.org) or the Jewish National Fund (www.jnf.org)